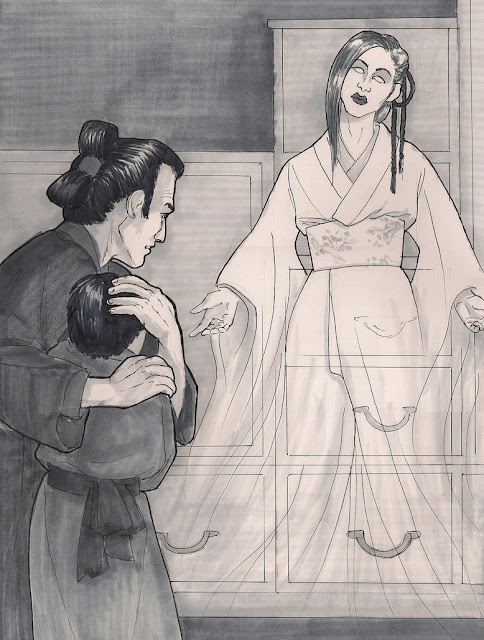 Most of the Japanese folklore is influenced by both Shinto and Buddhism. From the valley of Nishizawa to the holy Mount Fuji – the list goes on and contains a wide variety of weird and bizarre monster. However, there is a wonderful heart warming story that I cannot forget about a ghost return to her home just because a piece of passionate love letter (some people claim that this story was of one mother’s aching love for her son, so strong it allows her to reject death) . I'm not a romantic person but I was “head over heel” with the myth and  legend of this beautiful story !

A long time ago, in the province of Tamba in Japan, there lived a rich merchant named Inamuraya Gensuke. He had a daughter called O-Sono. As she was very clever and pretty, he thought it would be a pity to let her grow up with only such teaching as the country-teachers could give her. So he sent her in care of some trusty attendants to Kyoto, that she might be trained in the polite accomplishments taught to the ladies of the capital. After she had thus been educated, she was married to a friend of her father's family -- a merchant named Nagaraya and she lived happily with him for nearly four years. They had one child; a But O-Sono fell ill and died, in the fourth year after her marriage.

On the night after the funeral of O-Sono, her little son said that his mother had come back, and was in the room upstairs. She had smiled at him, but would not talk to him: so he became afraid, and ran away. Then some of the family went upstairs to the room which had been O-Sono's; and they were startled to see, by the light of a small lamp which had been kindled before a shrine in that room, the figure of the dead mother. She appeared as if standing in front of a tansu (or chest of drawers), that still contained her ornaments and her wearing-apparel. Her head and shoulders could be very distinctly seen; but from the waist downwards the figure thinned into invisibility; it was like an imperfect reflection of her, and transparent as a shadow on water.

Then the folk were afraid, and left the room. Below they consulted together; and the mother of O-Sono's husband said: "A woman is fond of her small things; and O-Sono was much attached to her belongings. Perhaps she has come back to look at them. Many dead persons will do that, unless the things be given to the parish-temple. If we present O-Sono's robes and girdles to the temple, her spirit will probably find rest."

I was agreed that this should be done as soon as possible. So on the following morning the drawers were emptied; and all of O-Sono's ornaments and dresses were taken to the temple. But she came back the next night, and looked at the tansu as before. And she came back also on the night following, and the night after that, and every night; and the house became a house of fear.

The mother of O-Sono's husband then went to the parish-temple, and told the chief priest all that had happened, and asked for ghostly counsel. The temple was a Zen temple; and the head-priest was a learned old man, known as Daigen Osho. He said: "There must be something about which she is anxious, in or near that tansu." -- "But we emptied all the drawers," replied the woman; -- "There is nothing in the tansu." -- "Well," said Daigen Osho, "Tonight I shall go to your house, and keep watch in that room, and see what can be done. You must give orders that no person shall enter the room while I am watching, unless I call."

After sundown, Daigen Osho went to the house, and found the room made ready for him. He remained there alone, reading the sutras; and nothing appeared until after the Hour of the Rat (Midnight) .Then the figure of O-Sono suddenly outlined itself in front of the tansu. Her face had a wistful look; and she kept her eyes fixed upon the tansu.

The priest uttered the holy formula prescribed in such cases, and then, addressing the figure by the Kaimyo of O-Sono, said: "I have come here in order to help you. Perhaps in that tansu there is something about which you have reason to feel anxious. Shall I try to find it for you?" The shadow appeared to give assent by a slight motion of the head; and the priest, rising, opened the top drawer. It was empty. Successively he opened the second, the third, and the fourth drawer; he searched carefully behind them and beneath them; he carefully examined the interior of the chest. He found nothing. But the figure remained gazing as wistfully as before. "What can she want?" thought the priest. Suddenly it occurred to him that there might be something hidden under the paper with which the drawers were lined. He removed the lining of the first drawer: nothing! He removed the lining of the second and third drawers: still nothing. But under the lining of the lowermost drawer he found a letter. "Is this the thing about which you have been troubled?" he asked. The shadow of the woman turned toward him, her faint gaze fixed upon the letter. "Shall I burn it for you?" he asked. She bowed before him. "It shall be burned in the temple this very morning," he promised; "and no one shall read it, except myself." The figure smiled and vanished.

Dawn was breaking as the priest descended the stairs, to find the family waiting anxiously below. "Do not be anxious," he said to them: "She will not appear again." And she never did.

The letter was burned. It was a love-letter written to O-Sono in the time of her studies at Kyoto. But the priest alone knew what was in it; and the secret died with him.