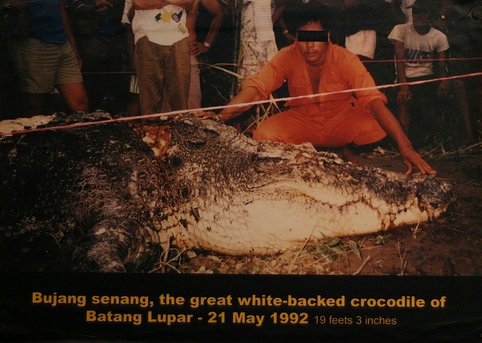 
Newspaper cutting dated 22nd May 1992.
On May 21, 1992, an Iban girl, Dayang anak Bayang was killed by Bujang Senang at Pelaban River, another tributary of the great Batang Lupar River near Lingga in Sri Aman Division, Sarawak Malaysia. The monster croc reputedly killed 100 villagers over a period of 50 years and was finally shot and killed with 44 bullets by several police sharpshooters and Iban hunters after a four-hour ordeal. It was the biggest and oldest crocodile ever caught in the area.