Well, I just came back from Datai for a short trip to the Crocodile farm and I realized that crocodiles are trully the "demon" of all reptiles. They are prolific attacker, formidable reptiles and a sharp jabber.It is beyond our wildest imagination when and how it is going to drag you to the water beneath as nothing can escapes from the strongest jaws in the animal kingdom. By the way, I posted herewith all the crocs images from our trip today. Enjoy ! 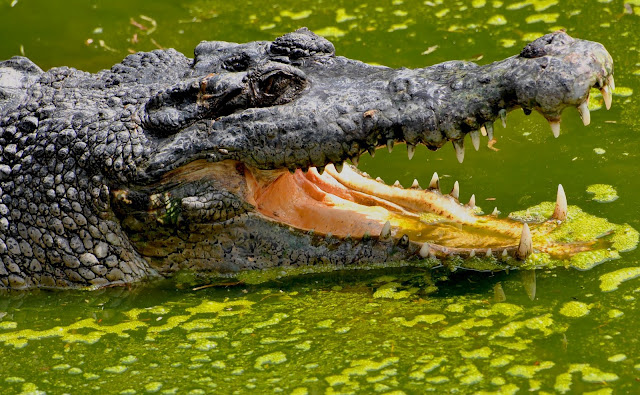 You may perhaps have heard legend of the fierce creatures that infested in the rivers in Borneo in Malaysia or Burundi in Africa. The story of a monster crocodile that was shot here in Sarawak,Malaysia "Bujang Senang and Gustave, one of Africa's most elusive killers - the 20-foot long crocodile in Burundi who was reportedly claimed over 300 humans' lives and still at large. This two legendary tales make the people believe that this crocs is actually a demon and not just an ordinary one. However, according to Unexplained Mysteries.Com - " Gustave terrorizes the millions of humans in his lands, not because he is a demon as they believe, but because he is one of the few surviving crocs of the old days ..." 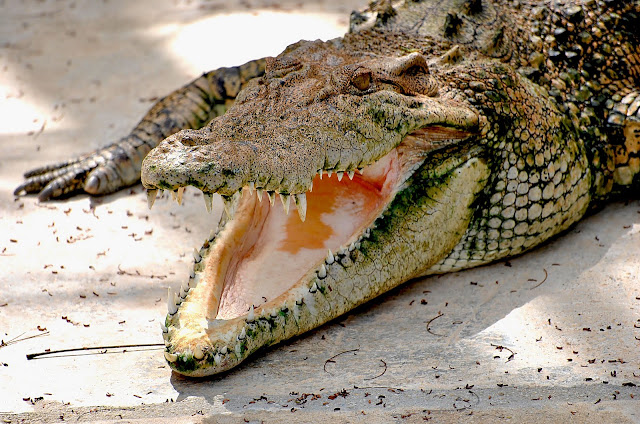 There are even some giant crocs that are more than 23 feet long among them especially in Nile and corner of Australia where a croc was spotted was about 6 to 7 meter long.Others information from Nat Geo Animal Planet revealed that Crocs are: 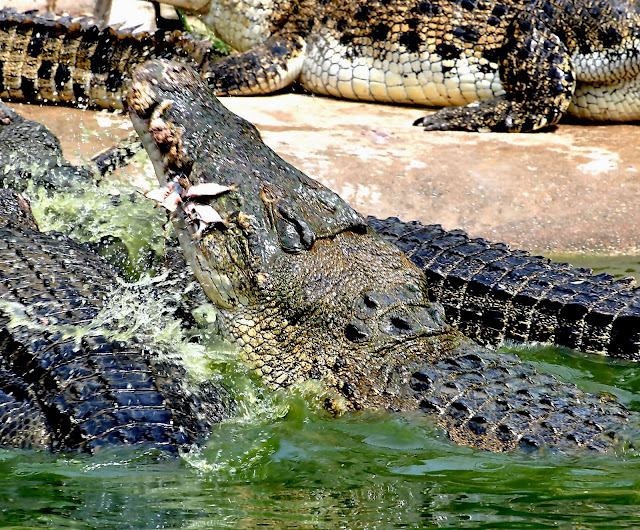 A Vicious Maneater: The saltwater crocodile is the largest reptile in the world, and perhaps the most dangerous. Along with alligators, saltwater crocodiles are responsible for more human fatalities per year than any other predator on earth. 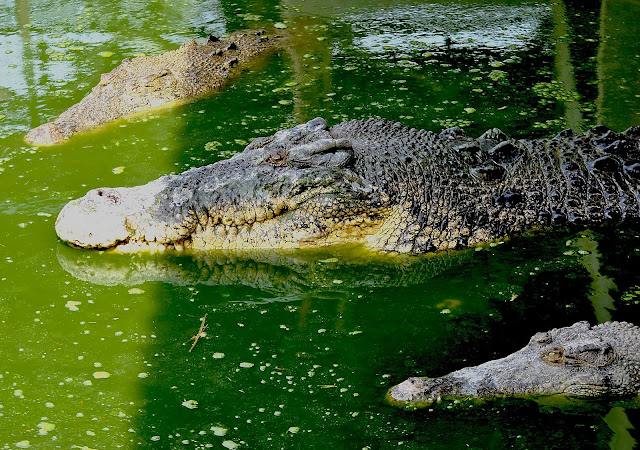 Made for Water: They are powerful swimmers, expertly adapted to life in the water, where they do almost all of their hunting. Their eyes and nostrils are located on top of their head, which allows them to see and hear prey while partially submerged. 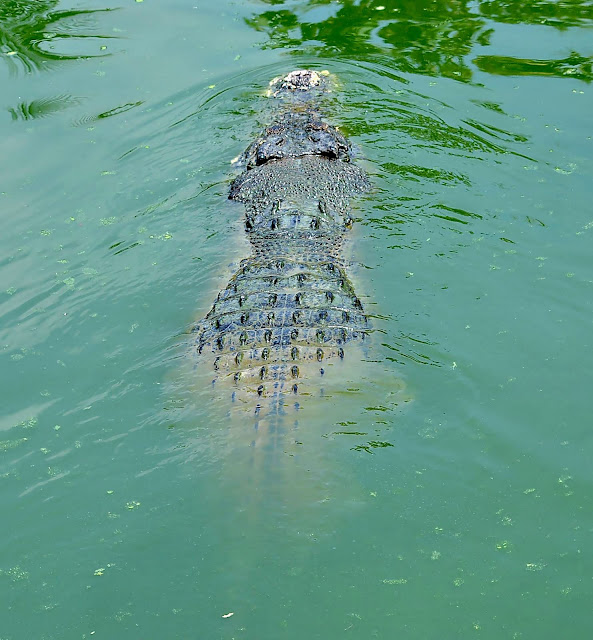 Stalk and Ambush: Saltwater crocodiles prefer to take prey from the water's edge. These patient predators will float for hours on end, eyes focused on the bank, waiting for a thirsty animal to approach for a drink. When a victim is spotted, the crocodile drops below the surface, inches forward to within striking range, then launches out of the water with a violent, bone-crushing attack. Hapless animals that don't get out of the way are dragged beneath the water's surface and drowned. 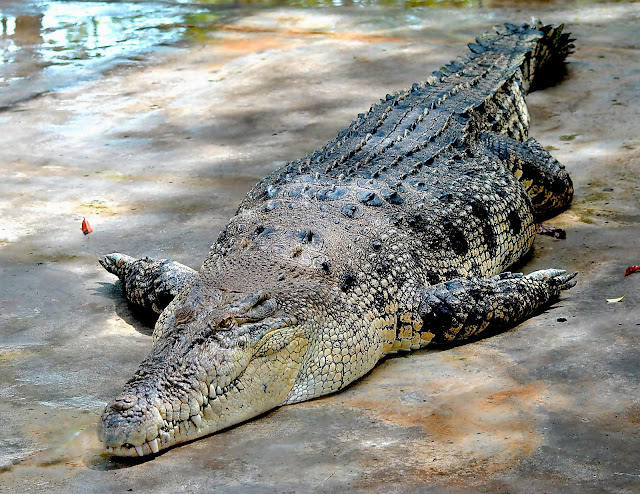 Underwater Storage: After twisting off a few mouthfuls of flesh, the crocodile will secure the carcass underwater beneath a log or riverbank, allowing it to rot over the course of several days, during which the reptile feeds on its prize at leisure. 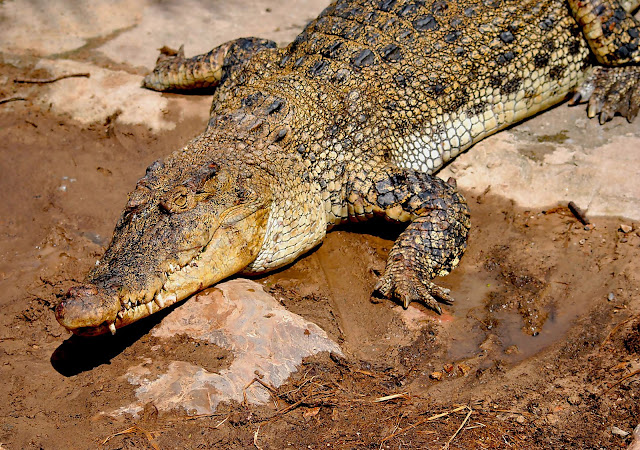 A Living Fossil: A throwback to the time of dinosaurs, the alligator and its relative the crocodile have changed little in the last 65 million years. The Chinese alligator of Eastern Asia and the American alligator of the southeastern United States are the only two species to have survived evolution 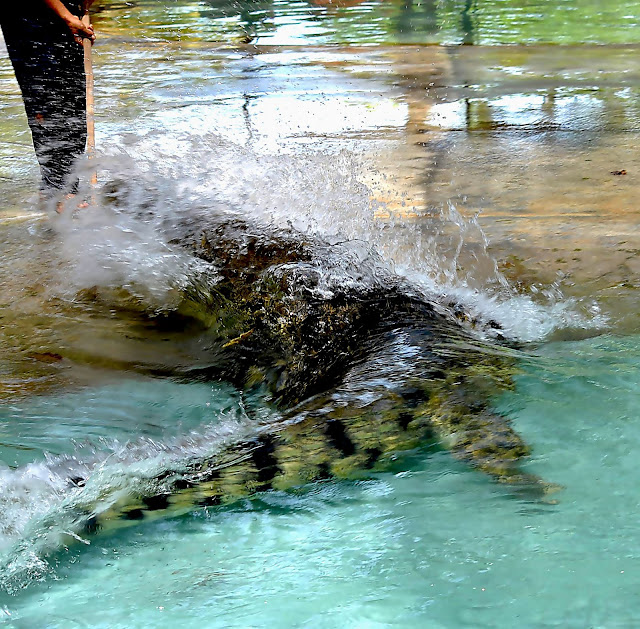 Death from Below: Both species prefer freshwater lakes, marshes and swamps, where they are commonly seen floating in a partially submerged, death-like stasis at the water's surface in anticipation of a fresh meal. They eat a variety of small prey, such as fish, turtles, snakes and small rodents, which they snap up and devour whole. Larger prey, like fully grown wild boars or even antelope, are dragged below the water's surface and held in a viselike grip until they drown, then are devoured piece by piece. 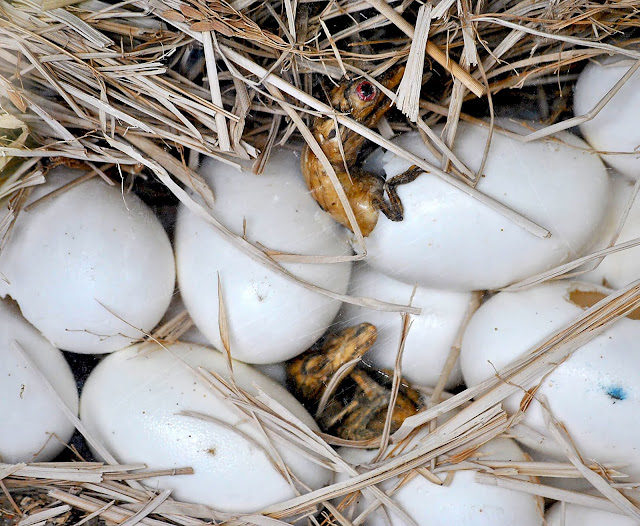 Mating and Rearing: Mating takes place underwater and males attract females by a roaring call. Twenty-five to 60 eggs can be laid by one female each season, which are placed in an enormous nest constructed of vegetation and mud. The mother will stay with the young for as long as three years. 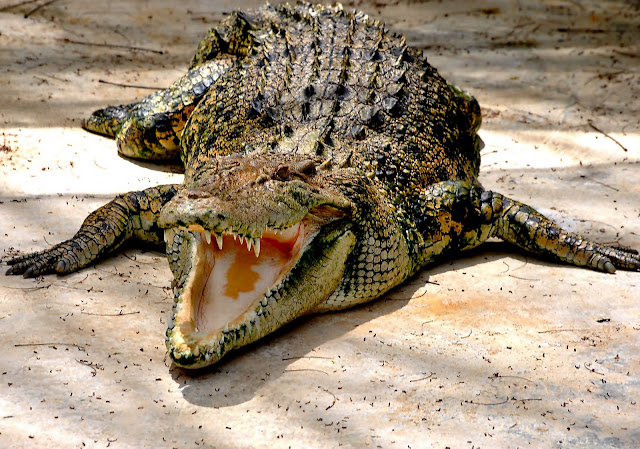 There are even some giant crocs that are more than 10 feet long among them at Langkawi Crocs Farm.

Here is another shots from our Crocodile Farm trip today. All these images recounts me the tale of a mousedeer who tricked a group of crocodiles into forming a bridge so he could cross the river. 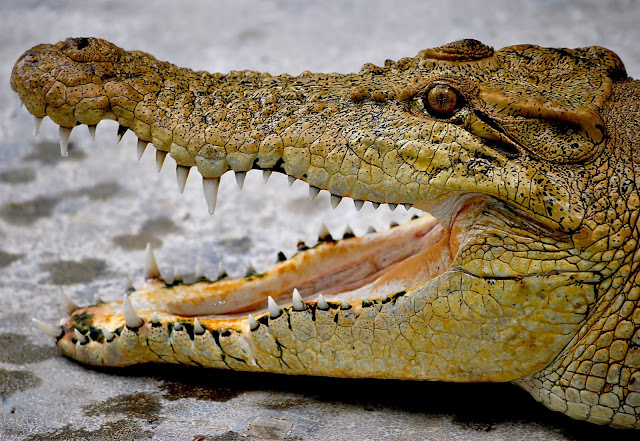 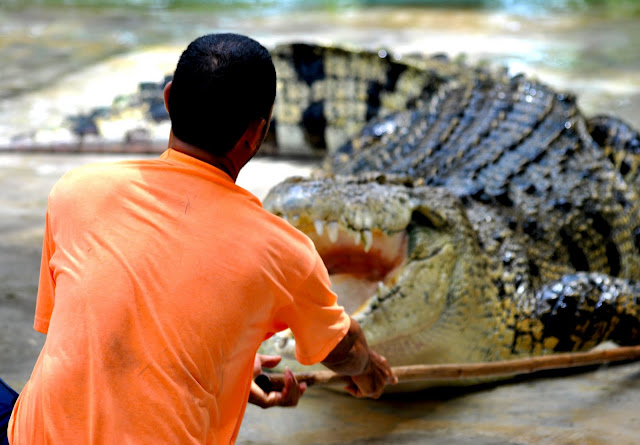 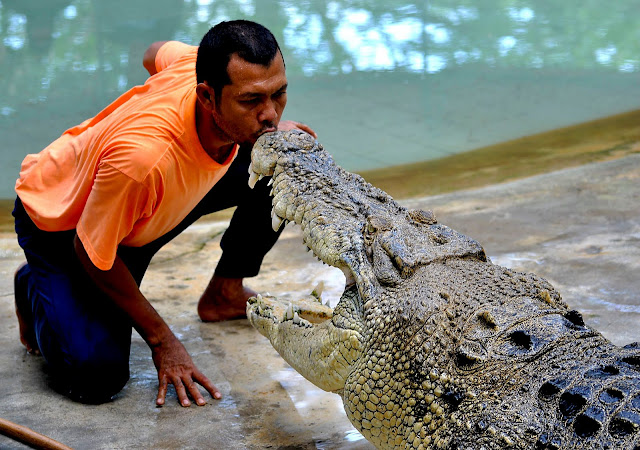 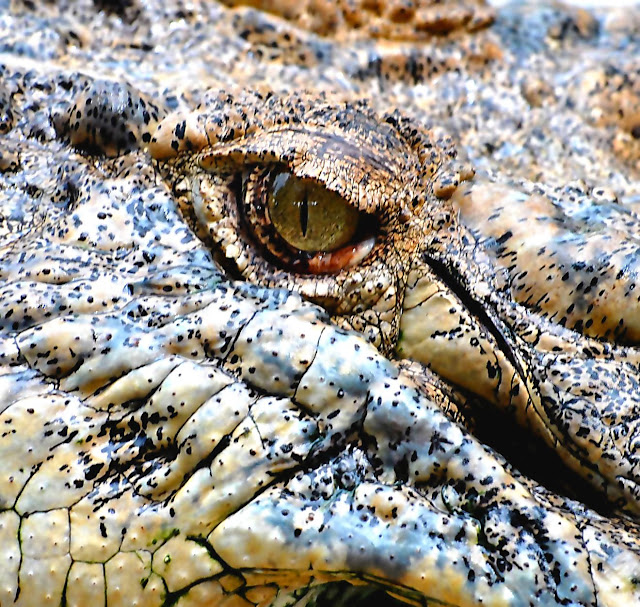 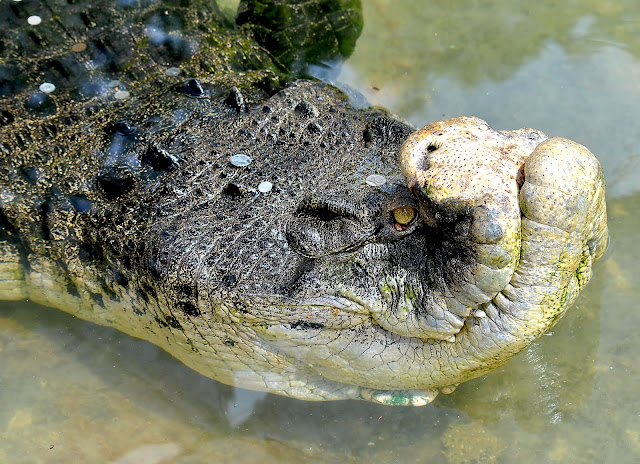 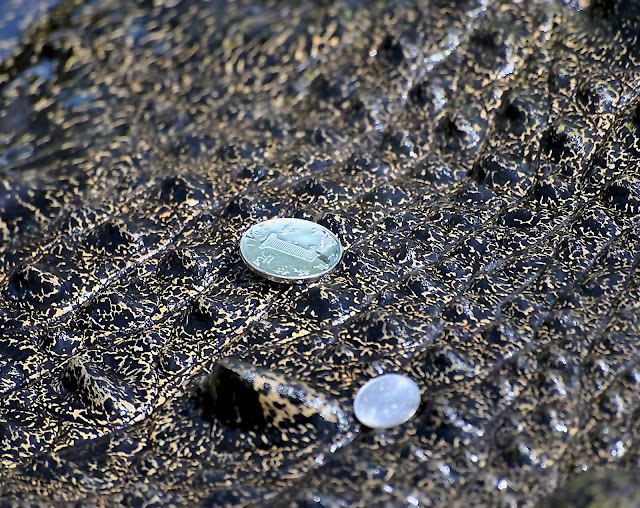 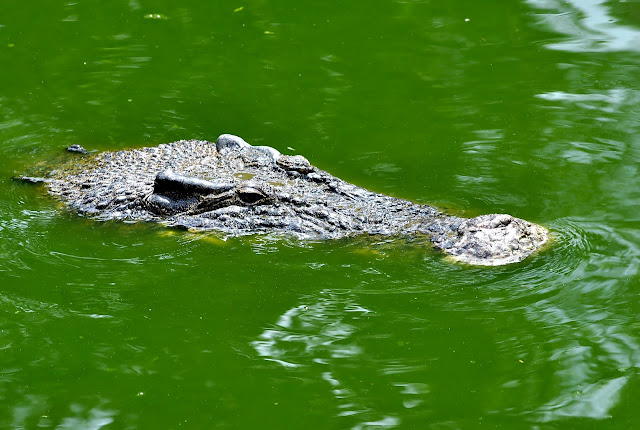 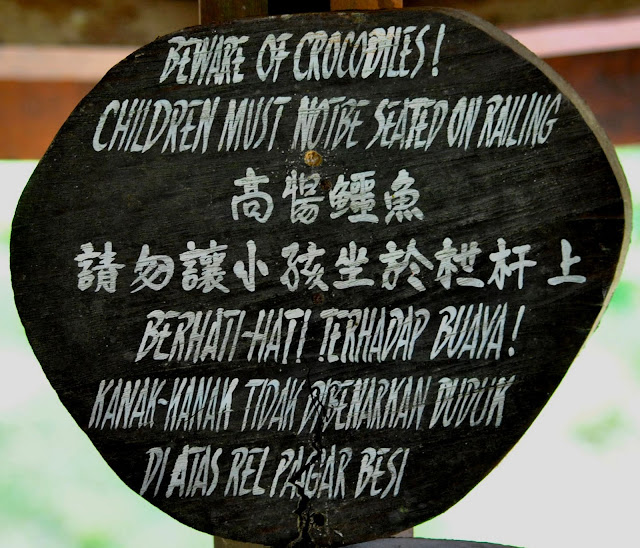 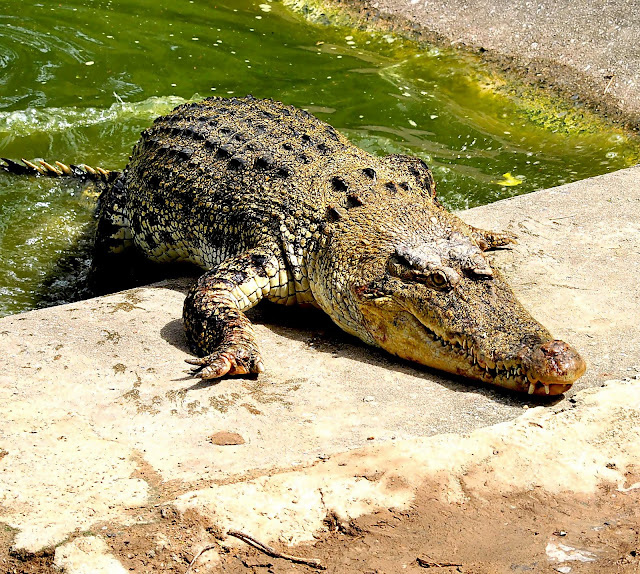 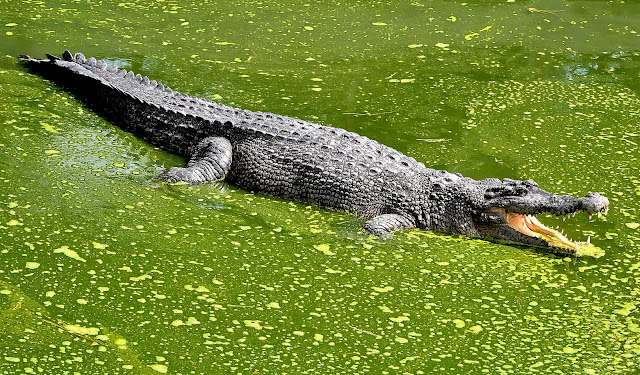 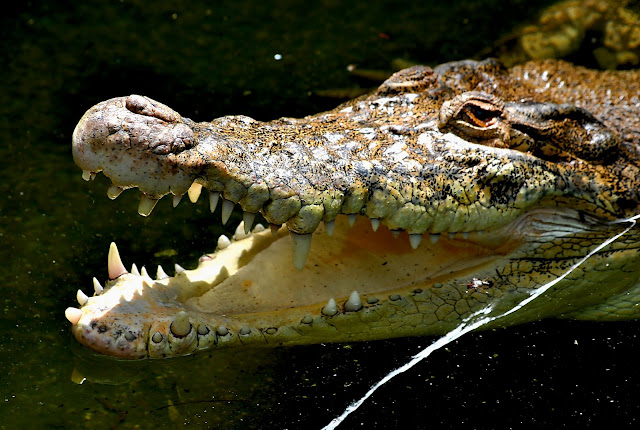 
Interested parties are welcomed to reproduce or quote materials published in this blog with the condition  that they are credited to http://hasnulyakin.blogspot.com/ to avoid